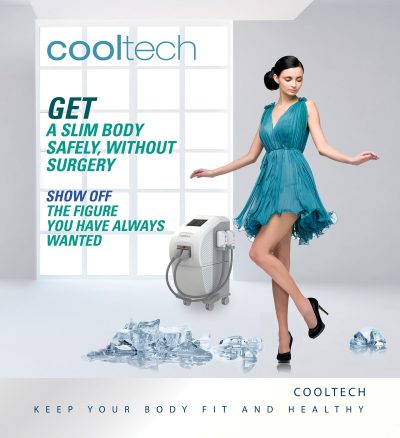 The latest piece of Technology at Encorė is our Cooltech™ fat freezing machine. Large numbers of fat cells can be removed from your body with a Cooltech treatment. Cooltech works by freezing areas of fat -a process  known as cryolipolysis.

Amazing technology, it has been taking Europe by storm and has been used to treat well over 1 million patients worldwide.

Removal of fat for cosmetic procedures is called Liposculpture. There are several known ways to remove fat – liposuction, heating or freezing. Our clinic is now able to offer all 3 options to our patients. We have offered Tumescent Liposuction at our clinic since 2004 and now have both Cooltech and TriLipo (heating of the fat by radiofrequency treatment) as non-invasive forms of liposculpture. 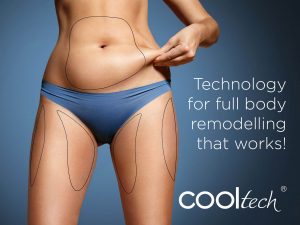 As heating and cooling of fat do not involve surgery, they are known as ‘non- invasive’ treatments. They can not remove as much fat as liposuction but do remove up to  30% of fat from the treated areas. In my opinion I think these non- invasive treatments are best suited to patients who have small to medium sized areas of excess fat they want reduced.

Even though the tumescent liposuction we perform at Encorė Cosmetic Clinic is a very straightforward and easily tolerated procedure, there are a number of patients who just do not want to consider this option. In patients who only have small to medium amounts of fat Cooltech is a great option.

Of the non- invasive treatments we have available, Cooltech is our preferred treatment option as overall it has a higher patient satisfaction rate then TriLipo and in most patients only one treatment is needed. However, in some patients we may use a combination of both heating and freezing the fat – known as Liposculpture by’Fire and Ice’!

Cooltech has many advantages over other commonly used forms of fat freezing – most of which require multiple treatment sessions. Cooltech usually requires just one treatment, has multiple handpieces allowing very tailored treatments to all body sites and up to two areas can be treated at any one time.   Both non- invasive treatments are safe and have minimal side effects. With Cooltech some temporary side effects such as numbness or discomfort over the treated area can occur.

So – if you are someone who has  a bit of your shape you would like reduced then Cooltech may be the perfect solution for you.For more information on see our website here